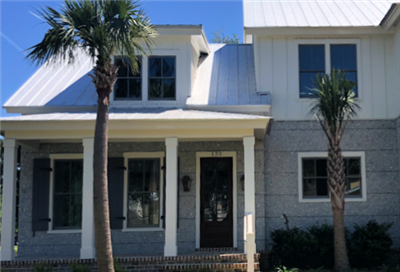 But what can’t be seen is the impact it will make on the Glynn County community.

When the sale closes at the end of this month, the proceeds of its sale will be donated to FaithWorks, a social services ministry affiliated with The United Methodist Church.

It’s a dream the Coptsias, owners of Picket Fence Properties, have had for several years.

“We’ve been thinking about this for a long time, and often when you’re in a position to help you try to consider in what way your efforts can be most helpful and most productive,” Leslie Coptsias said. “We really felt like this would best leverage our skills and abilities to turn it into funding and money that could then be used by FaithWorks.”

The 3,000 square foot home, with a list price of $689,000, didn’t sit on the market long. The home was under contract about an hour after being listed on the Multiple Listing Service (MLS).

Introduced to FaithWorks and its ministry and mission by Charles Molloy, a friend and FaithWorks’ Chief Development Officer, the Coptsias have long discussed how they could be involved in the ministry.

“We really love the organization and really believe in what they do, so it was a perfect match,” Mark Coptsias said.

The Coptsias are impacting the community by doing what they do every day, said Dr. Wright Culpepper, Executive Director of FaithWorks. Similar to those who are making masks for healthcare workers, the Coptsias are using their talents to serve others.

“There are probably a billion acts of kindness going on in the world where people have said, ‘I’ve got to do something; I don’t have any resources except what I’ve got in my pantry or what I’ve got in my sewing kit,’” Dr. Culpepper said. “Sometimes we don’t think we have anything to give, but when we give of ourselves it inspires and encourages others and reminds them that they play a significant role in the betterment of the world. Mark and Leslie doing that for us is going to be a real blessing to hundreds of other people in the community, and it’s something they do every day.”

Some of the money the Coptsias give will likely be put towards FaithWorks’ Open Doors program, a community housing and job training ministry, perhaps to purchase a new home. A portion of the funds will help continue to provide services and benevolent assistance to those in need.

The Coptsias, members of Wesley at Frederica United Methodist Church, build six to eight homes a year. They try to design each as if they and their two children were planning to live in it. They were inspired by FaithWorks’ ministry of justice and mercy.

“The idea and philosophy of helping your fellow man and that we’re all sons and daughters of God is an important message,” Leslie Coptsias said. “Helping one other and finding the humanity in the situation is what it’s all about.”

Living out one’s faith and making an impact on others – just as the Coptsias are doing – is what FaithWorks does, Dr. Culpepper said.

“What do you do every day? Instead of doing it for yourself, how do you shift it to impact the community around you? That’s what FaithWorks is all about; that’s our message, to live out your faith,” Dr. Culpepper said. “That’s what Mark and Leslie are doing. They’re making a difference.”